Well Hung are delighted to announce Dale Grimshaw’s first solo show at Well Hung Gallery. Pride and Prejudice brings together a body of work based on a ‘two worlds’ theme that Dale has been developing over the last few years. The work contains a strong political message, depicting portraits of threatened indigenous people, mostly from Papua New Guinea, which collide with familiar symbols of the privileged western world, producing a jarring effect that emphasises their powerlessness.

More recently, Dale has become involved with the political struggle to free West Papua from Indonesian occupation. This bitter and hard fought struggle is rarely reported in the West and through his work, Dale has been supporting Benny Wenda, the campaigns leader and long term champion Peter Tatchell, in raising awareness in the UK.

Due to Dale’s involvement with this Campaign his latest work is moving towards a subtler and more emotively lead approach to painting. Contrasting with the earlier, more graphic representations of Western culture, Dale has begun to incorporate softer references to his cultural identity, for example graffiti interspersed with decorative wallpaper motifs. This makes the figures themselves more personal and touching, reflecting his increased interest in the plight of individuals and the intensity of their cultural identity, which is so at risk.

Dale’s work has always been boldly figurative and has been inspired by his strongly held humanitarian beliefs. However, this political message is always achieved by an emphasis on powerful direct emotions and a deep empathy for his subjects.

We had the pleasure of interviewing Dale at his studio in North London to have a sneak peak at his new work and to ask him some questions about what inspires him, his street art and his forthcoming show with us. To read the full interview, please visit our site here.

Join us on Thursday 23rd March for the private view from 6pm until 9.30pm. Music and refreshments will be provided, the event is open to all but please do email info@wellhung.co.uk to confirm attendance. Admission is, as always, free.

Dale Grimshaw was born in Lancashire, in the North of England. During a difficult childhood, his drawing and painting became extremely important to him. He developed his skills at college, firstly with an Art Foundation course at Blackburn College and later to Degree Level, studying Fine Art at Middlesex University.

Dale Grimshaw has a successful gallery career, having exhibited extensively both nationally and internationally, including five solo exhibitions with Signal Gallery, London. His exhibitions have been widely recognised in the press and online, articles have been published in The Independent, Juztapoz, Art of England Magazine and Widewalls. His works are collected internationally, alongside celebrities including Adam Ant and The Prodigy.

More recently Dale has been invited to festivals nationally and internationally as well as painting many iconic walls across London, where he lives. 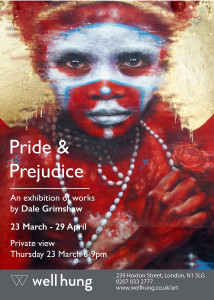